I’m reviewing the first five Goodreads days so far and it amounts to a fat 1 star because the drama llamas are out to play, folks!

So in case you’ve missed all the juicy GoodReads gossip – here it is, folks.

Important Links:
The Review that started it all
Blog
Another blog
Discussion here
and another here

Krokos begins by criticizing Kira’s prereview of Julie Cross’ Tempest.  It snowballs from there.  He takes the discussion to Twitter where other authors join in.  Their twitter messages can be found here.
I haven’t been able to find any tweets to implicate Arnett so I’m taking her off the list.

Lauren DeStefano: “I’d even venture to say GR makes 4chan look like a hallmark card from my own loving granny.”

Bill Cameron:  “Goodreads is such a hellhole I fled months ago.”

Courtney Allison Moulton: “A hot new way to destroy a publishing career before you have it.”

Pam van Hylckama: “Where you go when you get a bit too full of yourself.”

Rachel Hawkins: “It is your right to be an a-hole on the internet.  But then you don’t get to be offended when someone is like, “Hey.  You are an a-hole.”

and she goes on:

“B/c be honest.  You KNEW you were being an a-hole.  Maybe you were even being a FUNNY a-hole. And that’s valid!  Sometimes we gotta get snarky!”

“But when you SAY A-HOLE THINGS, and someone is like, “HEY, THAT IS SLIGHTLY A-HOLISH OF YOU!” maybe don’t yell, “OPPRESSION OMG!”

“No one is trying to oppress you.  Or take away your right to be an a-hole on the internet.  But words have power, actions have consequences.”

And still goes on:

“So anyway, that’s my two cents.  In the words of @wilw, don’t be a dick.  And if you ARE going to be one perhaps climb down from high horses.”

We can’t actually confirm, or deny, whether Hawkin’s is still tweeting this commentary or if people just got bored and stopped screen-capping them.
The debate also led to Agent Suzie Townsend posting to defend her clients Julie Cross and Dan Krokos and then to delete her Goodreads account.

Debate also raged on several user status’ and blog posts. An old post of DeStefano’s ignited debate over whether her attitude to negative reviews has changed in the year since it was published.

Then Hannah Moskowitz wrote An Open Letter To Those Who Review on Goodreads and everyone agreed she was, like, the coolest person ever.

The Review that started it all!

On Flannery’s 3 star (huh?) review of Goddess Melina Marchetta’s Froi of the Exiles, Danielle Weiller takes a swipe at the reviewer for her gratuitous snark.  Then gets defensive.  Then apologizes.  Very quickly.  To Wendy (Huh?)

Message 49:
“I found this review quite harsh and extreme in taking things out of context. Finnikin and Isaboe have never had an easy relationship and have always struggled with sharing responsibility and power. Theyve had some fantastic arguments.
I know goodreads is a place to share opinions but the sarcasm in this review – then giving it 3 stars when it sounded like you really wanted to give it 1 – was a bit mean. Spare a thought for all the authors hard work and reading this review and seeing your picture of her character – sometimes readers are just too harsh.”

Message 56:
“Now now, let’s not surround the minority here like a pack of wolves. I dont know any of you outside this review and its comments. I just wonder if readers care at times that authors do actually read these and can be discouraged by certain tones and comments.”

Message 68:
“I fully understand all the comments here – Id just like to know where the ethics and boundaries are here.”

3. Leigh Fallon’s abusive email is sent to the reviewer it was antagonizing.

All-round wonderful person, and hilarious reviewer, Stephanie receives an anonymous email.  The sender of the email claims to have received an email from Leigh Fallon regarding Stephanie’s Amazon review and it says the following:

There is the stupid cow from Goodreads who has been real nasty and keeps doing upreally bad reviews of Carrier, then gets her friends to go in and ‘like’ herbad reviews so that that review will be pushed up to the top of all the lists.Now she’s put it up on Amazon! She is a disgruntled old cow who doesn’t like meand how I got published. There’s no point in saying anything about her orresponding (she loves that) but what we can do is push her review back down thelist by bringing all the good reviews back to the top. How do we do this? Wellat the end of each review there is a little button where you can say whetheryou found the review helpful. Click YES on the good reviews. The more reviewsyou click YES you click on the good reviews the further down the list thatbitch will go. If you leave a comment on the good reviews, that helps too.She’s already got over 20 of her buds to YES her review so we will need to findmore people than that to YES the good reviews. There are about 8 pages of reviews(that’s about 7 reviews or something like that) so we can bury this horribletoe rag down the very bottom if you help me out.

As far as I’m aware, you don’t have to havebought anything on Amazon to get your vote to count. You just need to be a registereduser. It only takes about 5 mins to go through all the reviews and YES the goodones. I’m not asking to dickie with the system or anything, it’s just moving ahorrible review from the top spot. It’s so long, you have to scroll for agesuntil you get to the good ones. I’d really appreciated it help on his. I’d alsolove if you could maybe gets some friends or family to do the same.

Thanks a million, guys. You’re the best.

Disbelief over the authenticity is widespread.  Until Stephanie emails Leigh Fallon herself and discovers that it’s all true and so Fallon apologizes.

I owe you a message and an apology. I sent a private email to two close friendsand I’ve learned that that email somehow found its way to your inbox.Obviously, it was not meant for yours or anyone else’s eyes, but more to thepoint, it was not something I should’ve sent in the first place. It was writtenin anger and I’m sorry for the hurt it has caused you. As an author, I’mgrateful for all of my readers, including those who do not end up loving thebook—believe it or not!—and I appreciate anyone who takes the time to thinkcritically about the book and share their thoughts. That said, to put itplainly, your review hurt my feelings. I know it wasn’t meant as an attack onme, but some days, I don’t have a thick skin. So I turned to my friends andvented. I’m sorry for my hurtful words. You are clearly a book lover—youdeserve only my respect for our shared love of the written word. Please acceptmy apology.

Debate rages over Fallon’s response as indicated by the fact that in order to knock Stephanie’s review off the top spot, she would have needed far more than two people.

4. Vanity Published author, Jamie McGuire, lashes out at a reviewer.

McGuire has now deleted this post. Luckily, I have a screenshot.
The review that started it.
One discussion, and then another, longer discussion.

Sophie, a relatively new reviewer (since Oct 2011 and with only 30ish friends) wrote a review on McGuire’s debut novel, Beautiful Disaster.  The review is… less than complimentary.  Beautiful Disaster fans flock to attack her review.  Then complain when she responds.  Then McGuire gets involved, writing a scathing blogpost and makes several tweeted comments quoting 1 star reviews and criticizing them. 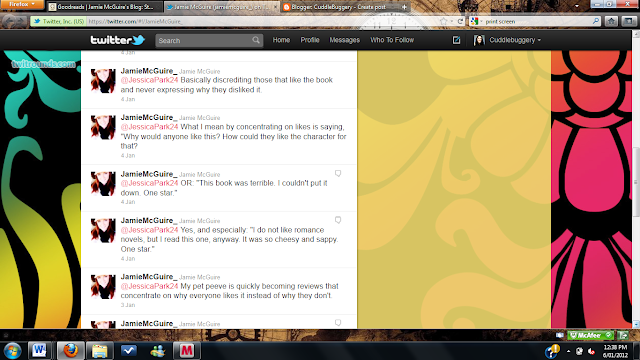 People point out that a reviewer, defending herself on her own review, does not class as someone attacking McGuire’s fans, but rather that her fans are attacking the reviewer.  Much discussion is had and McGuire… doesn’t apologize.  At all.

She does manage to make a bunch of half-assed responses, and then deletes them.

And onto the last and final scandal:

5. Fabulous author of Seraphina, Rachel Hartman is caught belly dancing to Love in an Elevator.

No links because this is only an alleged scandal.  Pics or it didn’t happen, Hartman!ETA:It’s true!!!!!!!!  Hartman, you saucy minx!

I can also report and confirm that within minutes of Hartman posting this photo on her profile, Goodreads crashed.  True story.  You just can’t make that shit up.

70 Responses to “The First Five Days on Goodreads”