In this week’s Buzz Worthy News there’s new Insurgent posters out, Emma Watson set to play Belle in Beauty and the Beast and Egmont to stop publishing.

Be prepared to have your viewpoint turned literally upside down by the new Insurgent posters that just came out.  They feature the actors from the movie looking upwards into landscape that is wrong-side up.  I’m not sure what the point is, but then again, I’ve never read past the first book of that series, so maybe one of you can enlighten me as to the double meaning.

Anyway, here are a few of them for your viewing pleasure:

In an effort to torture Steph with as many Fifty Shades of Grey mentions as we can fit in before the movie comes out, I bring to you, the answer to the question that has been on everyone’s minds since hearing that the book was going to be made into a movie.  Will FSoG include a certain outrageous “tampon scene” that was the top of discussion in practically every review?  The answer is an unequivocal, “Nope.”

Fortunately, director Sam Taylor-Wood has confirmed that the most “unusual behaviour” in ER James’s original bestselling book – which one writer called “the grossest book passage I’ve ever read” – will not feature in her film.

The scene in question takes place early on in their relationship, and involves Grey removing a tampon from Steele without asking.

In a feature in Variety magazine, Taylor-Wood confirmed that the scene would not feature, and that in fact, “it was never even discussed.”

Despite what Taylor-Wood says, though, I seriously doubt James let it go without a fuss, considering what a new in-depth interview with the director revealed.

“I kept trying to remind myself that they hired me for a reason. Some people said to me, ‘I’m surprised you haven’t quit.’ I was like, ‘Why would you think I’d quit?’ I never quit anything. Not without a fight.” She admits, of James, “We battled all the way through. She’d say the same. There were tough times and revelatory times. There were sparring contests. It was definitely not an easy process, but that doesn’t mean to say that it didn’t come out the right way.”

Which begs the question… what were all the fights about??

The goal was to protect the material and its manifestations into movies…. E.L. said she would be all over it like a rash.”

James … had her own ideas not only for the script, which she guarded fiercely, but also for the dialogue, the costumes—and the sex.

James’s deep desire to control the Fifty Shades films is not as cynical as all this might sound. In truth, she doesn’t seem to care that much about money, so I doubt she loses sleep over whether these ventures are doing well or not. It’s about something else: the fans. On set, James may have felt that she was the only one who would stand up for this specific fantasy, which has had such universal appeal. “There’s an Erika who is fun, fancy-free, and enjoying her success a lot, and the Erika who is obsessively controlling the property,” says a friend of James’s. “She truly believes that she has to control it because of the fans, because she’s the only one they trust.”

Boy, sounds like a lot of fun for the director, huh? 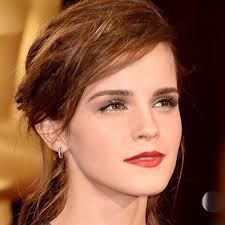 Not sure how I’m feeling about this one yet, and YES I KNOW THAT BEAUTY AND THE BEAST IS A MOVIE (but it’s also a fairy tale, and the topic of several books, one of them by the amazing Robin McKinley).  Anyways, obviously Emma Watson is amazing in pretty much everything and she will forever be a princess in my heart for playing the best girl character of all time (i.e. Hermione Granger).  But I can’t picture it yet, I guess.  Anyways, here is the news:

The actress made the announcement on Facebook Monday morning.

“I’m finally able to tell you… that I will be playing Belle in Disney’s new live-action Beauty and the Beast,” she said. “It was such a big part of my growing up, it almost feels surreal that I’ll get to dance to ‘Be Our Guest’ and sing ‘Something There.’ My six year old self is on the ceiling – heart bursting. Time to start some singing lessons. I can’t wait for you to see it.”

I think I need to see who they cast as Beast.  Or maybe see her in costume.

Sad news for authors with anything later than a 2015 publishing date with Egmont USA.  The publisher is set to close its doors forever today.

Egmont Publishing, which put its U.S. division up for sale in October, has announced plans to close the unit. The move, the Danish publisher said in a release, comes after the division failed to establish a “market leading position” in the States, and attempts to sell the unit failed.

Rob McMenemy, CEO of Egmont Publishing International, said the U.S. business, ultimately, “does not fit” with the company’s strategy, as it has not been able to become a market leader in the States. He added that Egmont was “hoping to succeed with selling the business, unfortunately this has turned out not to be possible.”

Man alive does this suck for the authors involved.  Here are a few of their responses from twitter:

Sold my 1st book to @EgmontUSA in Jan 2009, was busily working on my 6th for them when I got the news. Feels like losing part of my family.

However, with the publisher closing, most of my marketing & publicity will go with it. I will be brainstorming how to do this on my own.

Thank you to everyone who's tweeting/talking about #BuyAnEgmontBook – your kindness is GREATLY appreciated. XO

Normally I try to hew to the 5 pm standard for drinking but I think today, I'll bump it up an hour.

It's been a crappy day in many respects but I've also been reminded how freaking awesome the YA lit community is. Long live @EgmontUSA!

Have you ever heard of some indie author and thought to yourself, well, that’s great but I don’t have an e-reader or a tablet.  I’m not Money, McMoneybags, sheesh!  Well, turns out bookbaby wants to make life easier for you.

BookBaby’s new program will distribute self-published print-on-demand titles to retailers like Barnes and Noble through their website (with the potential due to sales and customer requests for in-store sales), Amazon, Powells, NASCORP, Ingram Network, Baker & Taylor Network, plus up to another 150 other outlets.

They also want to make life easier for bookstores, etc., too.

One of the chief concerns that prevents bookstores from carrying self-published works is the inability to return unsold titles, even at the author’s cost. BookBaby’s program will allow these outlets–from the local indie bookshop to Barnes and Noble’s physical locations–to return unsold books for a full refund, while still not incurring any cost to the author. BookBaby will absorb the cost of the refund.

But hey, let’s not leave those self-publishers out:

“Self-published authors deserve to have a place on the book store shelves around the world, and our program delivers the maximum exposure through retail stores and wholesale catalogs.”

Unlike many companies who offer publishing tools for indie authors, BookBaby does not take an additional royalty on each item sold. The full remaining percentage after the retailer’s cut goes to the author. There are metrics involved in factoring the royalty on the print-on-demand titles, but they are comparable to other distributors in the industry.

Not sure how the pricing metrics would work.  Createspace made me charge like $12 for cheap paperback of my book (and that was the end of that idea!).  Bookbaby also requires you to buy 25 copies of your book to start out with.  If they price the book at $12, too, you’re looking at a $300 investment.  Some authors don’t care about that stuff, but I guarantee some will.

Still, this is new and interesting and I like how this industry keeps turning everything on its head.